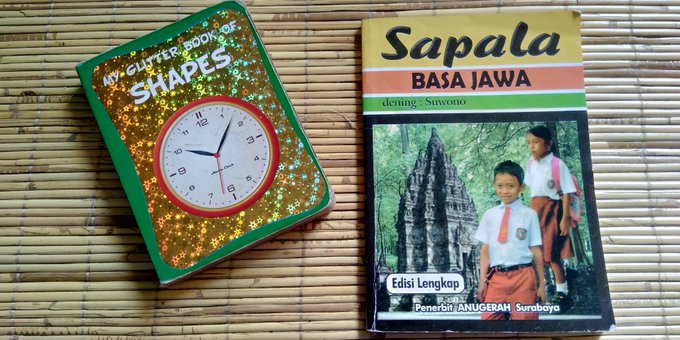 - April 20, 2020
Word is a primary component of a sentence. Without any words, a sentence cannot be produced so we won’t be able to speak or write it. In this sense, silah-silahing tembung serves a significant role to help us compose a good sentence. In Javanese, the part of speech goes as follows.
Tembung Aran (Noun) such as buku (book), suket (grass), omah (house), kelasa (mat), etc. For instance: Mimi nggelar kelasa ing latar. / Mimi spread out a mat in the yard.
Tembung Kriya (Verb) such as maca (read), ngombe (drink), mlaku (walk), jiwit (pinch), ambung (kiss), mangkat (depart), etc.   For instance: Isuk mau Mulyono mlaku nang sawah. / Mulyono walked to the field this morning.
Tembung Ganti (Pronoun) such as aku (I), kowe (you), deweke (he/she), etc. For instance: Kowe opo tahu omah kancamu kuwi? / Do you know where your friend lives?
Tembung Wilangan (Numeral) such as siji (one), sanga (nine), akeh (many/much), setengah (half), saithik (a little), etc. For instance: Sekolah iku nduwe siswa akeh…
Post a Comment
Read more

- April 17, 2020
In the previous post I have presented how words are arranged in a sentence based on their function as subject, predicate, object, and adverb. In this post I am going to explain types of adverb in Javanese along with examples to make them clear.1. Katrangan sebab It is the adverb that tells why something happens. We may call it adverb of cause. For instances: - Kasman ora Melu rapat amarga lara. / Kasman was absent in the meeting due to sickness. - Paijo ora nyambut gawe amarga isih cilik. / Paijo doesn't go to work because he is still a child.
2. Katrangan ancas It is the adverb that explains what is intended by something when it is carried out. We thus call with adverb of purpose. For examples: Ayu nyapu latar supaya resik. / Ayu sweeps the floor to make it clean. Gendis sinau sregep supaya lulus ujian. / Gendis studies hard in order to pass the exam.
3. Katrangan kahanan Kahanan means condition or situation. By this definition, it can be inferrred that katrangan kahanan tells the traits…
Post a Comment
Read more

- April 16, 2020
Ayahane tembung, or known as lungguhing tembung, indicates how words are arranged in a sentence based on its function. In other words, parsing a sentence based on its ayahane tembung means to distinguish which one is the jejer, the wasesa, the lesan, and the katrangan. In English, jejer equals the subject, wasesa the predicate, lesan the object, and katrangan the adverb.Let us observe the following examples.
1. Dimas tuku gulo esuk mau. / Dimas bought some sugar this morning. 2. Gendon maca buku ing jero kelas. / Gendon is reading a book in the classroom. 3. Pak Marwan ngrantos Pak Lurah wonten pendopo. / Mr. Marwan is waiting for the village head in the hall.
In the first example, the sentence is in the past as indicated by adverb of time esuk mau that means this morning. In the second sentence, it is clear that a boy named Gendon is in the classroom reading a book. Like the previous examples, the last sentence is also a complete sentence consisting of a jejer, wasesa, lesan, and katrang…
Post a Comment
Read more

The Structure of Javanese Sentence

- April 14, 2020
The structure of a sentence in Javanese normally follows the standard pattern of sentences in Indonesian as well as in English. So the syntax is quite simple and clear-cut. It commonly starts with a subject, followed by a predicate, and ends with an object where necessary. It is important to note that Javanese knows no tense like that found in English. Composing a sentence in Javanese is therefore relatively easy since there is no change of verbs that requires strong memory and concentration. The effort may be in amassing vocabularies in order to produce creative and authentic sentences. Let's see some examples below.
1. Aku mangan gedang. / I eat a banana. 2. Bapa sare wonten ndalem. / Daddy is sleeping in the house. 3. Saiki aku lesu. / I am hungry now. 4. Bedjo wingi tuku lengo. / Bedjo bought some oil yesterday. 5. Konco-konco arep menyang Jogja menesuk. / My friends are leaving for Jogja tomorrow. 6. Sugeng seneng nggambar. / Sugeng loves drawing.
The examples above indicate the use…
Post a Comment
Read more

- January 28, 2019
MY WIFE AND I were a bit alarmed when Pak Rajin (not real name—literally means Mr. Diligent) hadn’t shown up for two weeks now. It is his habit to come over as other people in the neighborhood have relied on him too to clean up their garden. As for us, we sometimes asked him to buy flowers to replace the old ones. Now we’re wondering why the diligent man who speaks a little has seemed to disappear. We would like to assume he has returned home to his village since rice crop is progressing. It’s likely he is harvesting paddy in his own fields or his neighbors’.
When he finally showed up two weeks later, I immediately invited him to clean up our yard. Dried leaves and long lawn are everywhere.
“I haven’t seen you for a while now. Have you been home?” I asked.
He smiled and replied, “I was but jailed, sir.”
My wife and I were shocked. “Don’t be kidding! Why on earth were you jailed?”
He told us he was watching his neighbors gambling when policemen came to arrest him. He was alleged to join the…
Post a Comment
Read more

- January 28, 2018
Javanese is one of unique languages in the world which is currently spoken by 82 million people in Indonesia. A uniqueness specifically lies in the degree of politeness used when speaking to different people.   It has a three levels of expression to address to people of different age. Ngoko, being the first, is probably the widest in use as it enables everyone to talk freely without consideration of politeness. Ngoko is more casual than the other two levels and used by friends or colleagues in informal context. Different level of politenessFor instance, "Awakmu njaluk opo?" that means "What you do want?". It is spoken to peers that indicates the most informal way of speaking as none of the communicators are older who deserve veneration. Both speakers feel confident and relaxed to express themselves.
In the second level, called krama madya, the sentence will say, "Sampean nedi nopo?" that contains the same message. It is normally said to those older but wit…
Post a Comment
Read more

Rudi G. Aswan
I am keen on learning new languages and love to share with others. I also blog on https://belalangcerewet.com/